No matter how I write it, I’m having difficulty digesting the fact that 10 years have passed since the blustery day in April that completely changed my life. I’ve lost track of how many times people have asked me, “Were you there?” I’ve also lost track of how many times I’ve told my story. I think people are usually surprised by how easily I tell it. To me, it’s like I’m telling some horror story I read or saw on the news.

Ah, the power of compartmentalization.

I recognize that’s not the healthiest way to deal with the ordeal I and so many Hokies went through, but it’s how I stave off the nightmares and anxiety that haunted me in the early years. But, every once in awhile, I can’t compartmentalize and I come face-to-face with the gripping reality of life’s horrors I faced at 20-years-old.

A few weeks ago, I was evacuated from brunch and put on a lockdown due to a shooting and subsequent four hour standoff in Vegas. At first, I was shockingly calm—numb almost—and then several hours later, the anxiety and fear I have worked so hard to control over the years pounced on me. 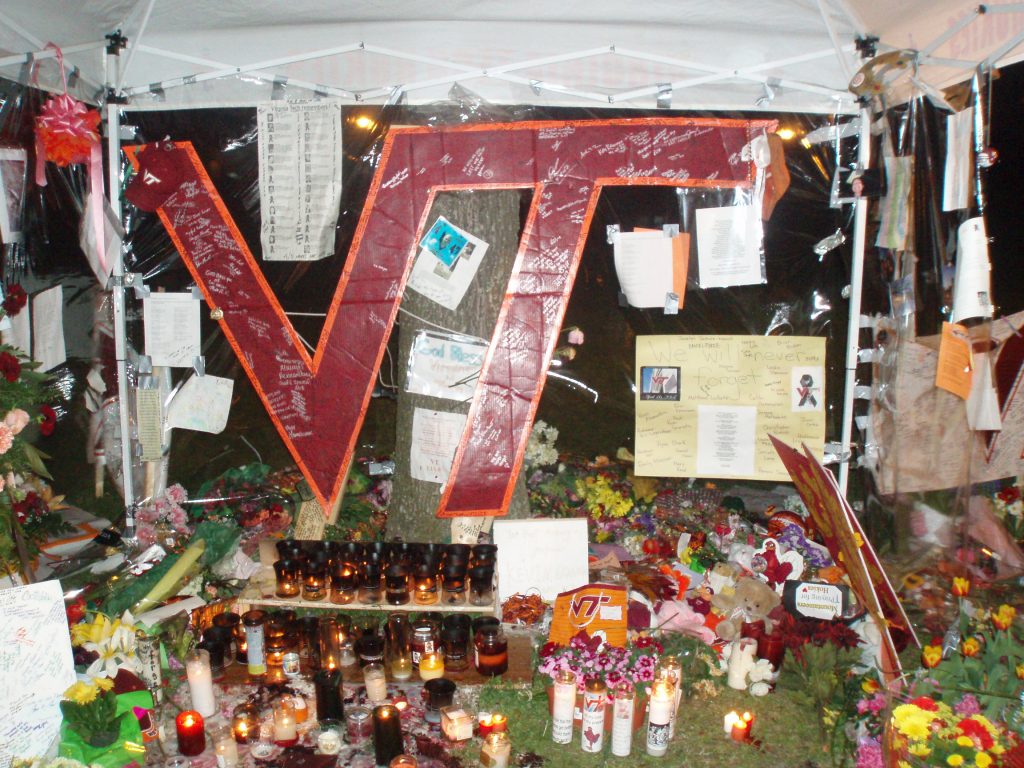 I was transported back to that classroom, the desk I crouched under, and the nervous chatter from my peers around me, as we wondered if this would be it for us. I’ll never forget calling my parents—begging my dad to listen to me as he hurriedly asked if he could call me back because he was about to enter an important meeting. Blurting out I was under a desk and I didn’t know what was going to happen. That I loved him. The shocked silence that followed. Frantically trying to track my mom down and calling her at work, her cell, and finally our house. Praying my brother would answer the IM I sent him. Almost crying with relief when he answered and grabbed my mom. IMing them a play-by-play until I was told to run to my car. The surreal feeling of sprinting to my car as guns, police, and FBI agents were blurs around me. Driving out of the parking lot to my apartment like a bat out of hell. Parking and sobbing as I threw myself into my best friend’s arms. The harsh reality that was to follow—32 members of my Hokie family were gone.

The innocent bubble of classes, football games, parties, and other college fodder were shattered in an instant. We were at a loss. How did our beloved Blacksburg get transformed into the place our country’s deadliest shooting occurred? How did our cozy campus in the Blue Ridge Mountains become swarmed by cameras, news vans, and prodding journalists?

I was in a daze the 24 hours after everything happened, but the reality of what had occurred sunk in at the Convocation that then Governor of Virginia, Tim Kaine, and President George W. Bush attended the next day. I’ll never forget looking across our basketball stadium as I gripped two of my sorority sister’s hands with tears streaming down our faces and saw a few of the fraternity brothers I had been in Charleston with the weekend before. That weekend we were kids without a care in the world enjoying their fraternity’s formal. The kids from that weekend had been transformed into adults in an instant—our innocence stripped in a matter of hours, minutes, seconds.

As this anniversary crept up, I struggled with a multitude of feelings. I remember obsessing over the fact that my beloved school would be tied to the deadliest shooting in our country’s history. Now, I’m horrified that this didn’t come to fruition. So many mass shootings have happened over the course of the past decade, and each one seems to be more gruesome and horrendous than the last. It has been ten years since 32 incredible people lost their lives and our country can’t get its sh*t together. It is infuriating.

However, it isn’t lost on me that this anniversary takes place on Easter—a day of new life and hope. And instead of allowing the sadness and frankly, anger, that not much has changed since 2007 consume me, I’m going to cling to hope. The same hope that rallied the shattered Hokie Nation 10 years ago, as we defiantly proclaimed that we would prevail less than 24 hours after the tragedy occurred.

Hope that our country will wake up one day and demand for change. Hope that 32 Hokies didn’t lose their lives for naught. Hope that my future children won’t ever be afraid to enter a classroom to get an education. Hope that good will triumph over evil.

Sometimes, all you can do is hope and have faith.

Sending love, light, and hope to the Hokie Community.